She greeted me, took a chair, and sat next to me; I asked her about the story of her exile from Aleppo to France. Here is what she told me:

I am Douha Ramadan from Aleppo. My grandfather’s house was the first stone building in the Assyrian area of ​​the city.

I mastered French from my father and learned from him that a human being is the most valuable thing in life.

I studied history at the University of Aleppo, but my knowledge of the Italian language qualified me to work as a tour guide for 20 years.

I was arrested in 2005 after commenting on a lecture at the Assad Library in Damascus. My eldest son was detained at the beginning of the 2011 Revolution for a whole year for refusing to participate in a singing party glorifying Bashar Assad! My second son was also arrested in 2012 for two months, to come out after losing half of his weight; so, I had to sell my house at a low price and flee with my children outside Syria at the end of 2012.

I chose Egypt as the beginning of my asylum journey because one of my sons had preceded me there. I rented a house and opened a café and restaurant called “Bab al-Ward” in Cairo. It was later known as the “Syrian Café,” but after Sisi’s coup, harassment began against Syrians and their shops. An off-record regime for forcing them to pay a certain amount of money was illegally applied. So, they imposed a monthly payment on our shop after it was broken into for the first time by the “neighborhood thugs.”

I left Egypt for Turkey for 15 days to see my mother and sister because Egypt had prevented Syrians from entering by that time, but I could not return to Egypt although I had two lease contracts, for the house and the restaurant for five years and an Egyptian residency permit. So I stayed in Turkey against my free will.

I found myself a stranger in Istanbul. I felt alienated away from my children, without a language, without a home, work, money, and no breadwinner. Alone without friends in a big city, I sold my jewelry and opened a restaurant and café in the Asian part of Istanbul.

I began to feel tiredness and permanent exhaustion in my body. I blamed it on my psychological state, but the pain spread all over my body.

Suddenly the doctor told me it was breast cancer and a surgery was needed to remove it.

In the hospital, as I crossed the long corridor to the operating room, I heard again the echo of the chants of our youth against tyranny; I saw the roses in their hands strewn with blood until the anaesthetic robbed me of my repercussions.

After the operation, I continued the chemotherapy, and my hair fell out completely. When I stood in front of the mirror, I saw a woman who looked like me and said to me: “Hold on, Douha. We will resist together the cancer of the body and the cancer of tyranny.”

While visiting a friend of mine, she advised me to travel to Europe to continue my treatment there, so I made up my mind and decided to travel by sea.

I sold my last rings and went up with many people on a rubber boat on the first of September 2015. The waves were high and frightening; we spent 19 hours there.

We ran out of fuel and a Greek helicopter rescued us and took us to the island of Kos. I still remember that the drowning incident of the Syrian child Aylan Kurdi, found dead on a Turkish beach, was the day after my arrival in Greece.

I continued my journey from Athens to Milan, Italy, and then to the French capital, Paris, by train. I arrived in France on October 6, 2015; I was hosted by a French lady on October 13th and she was very happy with me.

In France, I began to suffer differently. When submitting my asylum papers, I used to stand since 5 am in a long queue to get my turn at 9 am, and as soon as my turn arrives at 12 noon, they used to announce the end of work. The same suffering would be repeated the next day. I stayed like this for two months in the bitter cold and under the snow. I was able to get a room to live in through a French civil association that helps unaccompanied women asylum seekers.

I received a sewing machine from the association and despite the chemotherapy doses, I began teaching sewing to refugee women who were waiting to be approved for asylum.

Then I was introduced to the fashion boutique of a French lady named Sylvie, and I still work for her today.

I served Syrian food on one occasion, and the boutique customers liked it. They took the initiative to order Syrian food for birthday parties and weddings. I was chosen to cook in a French festival held from August 1-5, 2020, in which I prepared 1,000 dishes of various Syrian cuisine.

Despite continuing treatment for my disease to return to my normal condition, all my sufferings have not affected my will. I have a Syrian memory to take refuge in, and a cultural and historical repertoire that I presented to the French as a voluntary ambassador; one who was not appointed to her position by anyone or anything other than my constant dream of a free and democratic Syria.

La Rebelle d’Alep (The Aleppo Rebel), the book that narrates the story of my life, was published in French in 2022. 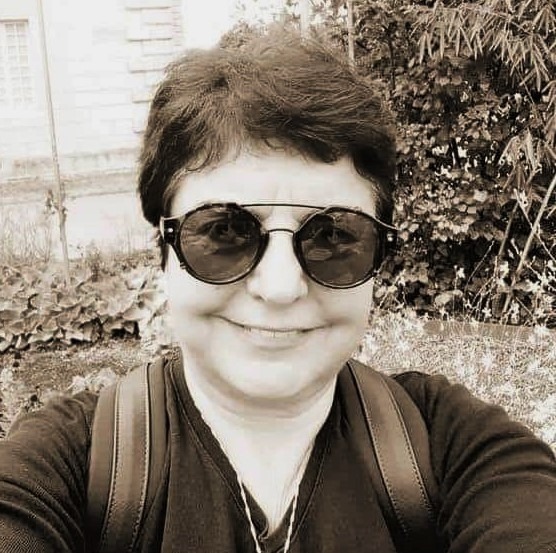