Just like Syrians, Ukrainians are facing the most ferocious criminal killing-machine that exists in the world today. It is the same that we in Syria have been facing for the last seven years.

Exactly as they were spreading their fake narrative, propaganda, and misinformation campaigns about Syria’s White Helmets, the Russian regime is now spreading misinformation about Ukraine as well. The same Russian tactics being applied in Syria are used in Ukraine today. The only difference is that in Syria they used the excuse that they were fighting terrorists and now they are attacking Ukraine to get rid of its Nazi elements.

Russian operations always focus on destroying civilian infrastructure such as hospitals, schools and water supplies so as to force people to move on and become displaced or refugees. They are masters of the scorched-earth tactic.

“The Russian military commanders have no principles, no respect for human rights and no war ethics…”

From our experience at the White Helmets, here is a list of key points that our brothers and sisters in Ukraine need to take into consideration as they can be useful in the face of the Russian killing machine. The Russian military commanders have no principles, no respect for human rights and no war ethics, so to speak.

It is important to organize your civil defense forces inside each city in the form of small teams of four or five, dispersed geographically with small vehicles that can easily reach an attack site. Never have any large or permanent headquarters as these will become potential targets. The Russians have a huge desire to target civilian facilities, especially the ones most needed by people.

Never give GPS locations of medical facilities to any foreign body, even the UN, which may claim it needs the information to keep them safe. The Russians have a long history in using GPS information to target these facilities.

The Russian air force is well-known for the crime of “double tap” strikes. After the initial attack, you’ve got about seven to nine minutes to be able to do anything in that area, before they can hit it again. So, those seven to nine minutes are really crucial. Some team members should be deployed to monitor the skies for planes, as this is a better early warning system.

There must be small medical outposts around the city that can handle minor injuries and take the pressure off larger hospitals, but they need to be kept hidden and move them often or they will be targeted by the Russian military. This will also reduce pressure on the larger hospitals.

The GoPro camera is the best way to document what is taking place on the ground in order to fight Russian disinformation. This will be very useful in future trials of war criminals.

Last but not least, never let the Russians have any say or control over how humanitarian aid is distributed. They will use that power to starve out civilian populations, as it is doing in Syria now.

“We are ready also to send our civil defense teams to Ukraine.”

Also, in my capacity as the chief of the White Helmets, I announce that we are ready to help our Ukrainian brothers and sisters in any way we can. Currently, we are preparing a series of videos in Ukrainian language to help civilians learn basic civil defense tasks, such as how to handle unexploded rockets or bombs and how to evacuate a building under attack. This is in addition to working on the lists of supplies and equipment Ukrainian rescue teams will need while operating in a hot spot. We are ready also to send our civil defense teams to Ukraine. 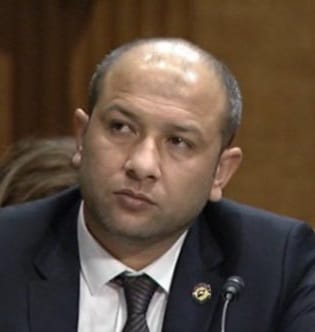