Most of the social media platforms are full of criticism of the Syrian poet Nazih Abu Afash for praising the Russian invasion of Ukraine and exonerating Vladimir Putin’s soldiers from brutal massacres because they are not “American hackers.” Even worse, in a video, he called himself “the Russian poet,” signing his poems “Vladimir Putin Abu Afash,” in support of and in solidarity with Moscow’s “operation.”

Incidentally, it happened in 1972 that I lived with this man for a whole year, receiving training in the armored corps while we were in the obligatory military service in Syria. The training was a prelude to the October 1973 Arab-Israeli War and we could not stay in the Armored College buildings for fear of being bombed by the Israeli air force. Therefore, we moved to rugged areas, sleeping under tents and training in lands that were somewhat similar to the terrain of the occupied Golan.

One of my partners in the tent was the poet Nazih Abu Afash, and he was still in the stage of poetic stammering, engulfed in an unbridled lust for those who wished to exchange love with each other. During that year, we spent long evenings discussing his poetry and the inspirations of creativity that predicted the brightness his star would achieve in the world of poetry not long after.

He often whispered to me that his leanings were leftist and that justice, equality, and freedom were missing under the ruling Ba’ath party regime. In the absence of others around us, he would sing poetry that resonated with his leftist ideas.

We dispersed after graduating with the rank of lieutenant, each of us to lead a platoon of tanks that would engage in the war along a front extending more than 150 thousand kilometers. After the war ended, I used to meet with the poet Nazih in some forums and nightclubs frequented by artists, poets, and elite intellectuals. Indeed, the star of this poet has risen as I had expected it would in the days of the tent.

After the collapse of the Soviet Union, fans began to notice that Afash’s cultural formation was beginning to suggest that his left-wing consciousness was in crisis and that thinking about politics in poetic form had become a tool with a Christian mystical undertone.

his poet’s motives for siding the Russians, who stormed a neighboring country perpetuating a bloody massacre go beyond the direct political alignment

The weakness of the left in the world after the fall of the Soviet Union for Abu Afash — and a good number of Syrian intellectuals who look like him — was nothing but a station to review and reconsider a system of values ​​that governed an entire course of thinking in the world and formed a fertile environment for tyranny. However, the leftists did not modify some concepts and embrace liberalism as happened with the left in the Western world. On the contrary, phrases appeared in the literature of the leftists in Syria describing the event as a “defeat of the great dreams” and a “failure of an enlightening project,” which produced a state of denial that translated into rigid nihilism. Pessimism and despair had begun to dominate the vision of the leftists moving away from rationalization, joining change, and adjusting their positions to keep pace with the transformations that changed the polarity of the world.

This poet’s motives for supporting the Russians, who stormed a neighboring country perpetuating a bloody massacre go beyond the direct political alignment that approximates the Russian criminality that bloodied the Syrian reality. Poetry that twists the neck of truth and interprets criminality to become a truth according to Abu Afash indicates a Christian mysticism seen in many of his collections, where the civil origin is sectarian without being affected by the poetics of leftist ideology. This argument is the dialectical contradiction, wherein denial and deception wrestle with a need to justify his political stance by representing himself in poems as one of the Christian minorities in Syria exiled because of a false ideology. This contradiction is demonstrated by the poet’s statement on his Facebook page: “Oh, wonderful Russians, if there is no way to escape the massacre, do it.”

In the context of the poet’s statement, Nazih intended to explain why he stands with the regime in Syria and its alliance with Putin for their neglect of human lives, victims, refugees, and detainees.

The Syrian people, like the Ukrainian, will not forgive a poet who has isolated himself in the Valley of the Christians, the countryside of Homs. His failure to be a rational leftist capable of change and revision, and his inability to resolve his relationship with his Christian origin, have resulted in neither denial nor recognition. The history of poetry will not forgive Abu Afash for his praise of the massacres and the dictators who committed them, in the style of the desperate and broken mystic in a world that aspires to freedom and dignity. 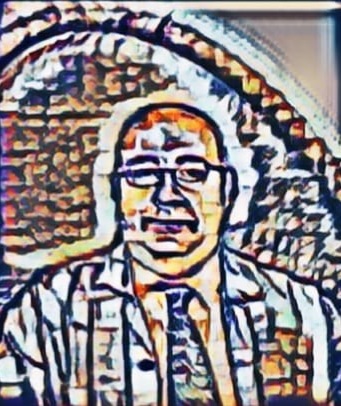